The study of human behavior has been in existence for the past many centuries and different scholars have formulated an array of theories that try to explain why individuals behave in certain ways under given circumstances. Arguably, the theory of self-efficacy which lies in the Bandura’s social cognitive theory has proven to be the most effective and applicable theory in the explanation and analysis of human behavior. The concept revolves around the belief in one’s ability to succeed through difficult situations such as exploitation, low self esteem and inferiority complex among others. According to Bandura (1998), people with high self-efficacy view difficult tasks as doable rather than avoidable. As such, the concepts and assumptions made in this theory can be utilized to help people suffering from various issues address them effectively. Once these concepts are implemented, the individual can develop confidence in his/her capability, leading to higher productivity.

Considering the significance of Bandura’s theory, this study shall present a critique of the theory of self efficacy. Various aspects of the theory shall be analyzed in a bid to determine its applicability in my research project which will seek to highlight women experiencing intimate partner violence (IPV) in various shelters within my area of study. The theory shall be used to evaluate whether the women feel safer when equipped with a smartphone loaded with emergency numbers. The purpose of my research will be to determine whether the smartphone is a supportive tool for women experiencing IPV.

Bandura (1998) defined efficacy as an individual’s belief in his/her ability to categorize and carry out certain tasks in a bid to achieve a desired goal. In this theory, Bandura contends that if a person is successful in accomplishing various tasks, he/she gains more confidence in their ability to behave in particular manners. In addition, the theorist asserts that our belief in self- efficacy has a huge impact on our ability to accomplish set goals since it affects our personal choices, level of motivation and emotional reactions. For example, the human race has a renowned tendency of avoiding tasks that threaten their coping abilities. Peterson & Bredow (2008) further contends that the concept of the theory of self-efficacy is hinged upon the belief that observational learning and social experiences play a pivotal role in the development of one’s personality as emphasized by the social cognitive theory.

Structure and function of self-efficacy theory

According to Meleis (2007) the structure and functionality of any given theory can be deduced from the clarity, consistency, tautology and level of simplicity or complexity present in the theory. With this in mind, a look at the concepts, assumptions and propositions forwarded by a theory would at the end help determine the relationship between the structure and function. According to Bandura (1998), the theory of self-efficacy is based on the founding argument of the social cognitive theory. The building pillars of self-efficacy theory are performance accomplishment, vicarious experience, verbal persuasion and emotional arousal. These aspects are interconnected and work well if applied in the behavioral adjustment process.

To further expound on this, Redfern et al (2002) defines performance accomplishment as an individuals experiences as defined by their past successes and failures. Redfern et al (2002) further state that these experiences are generalized and consequently form predetermined expectations incase the individual is faced with a similar experience. To explain this, Bandura (1998) asserts that repetitive success in a particular behavior leads to the development of a stronger efficacy while repetitive failure reduces the level of efficacy. Performance accomplishment is therefore very important and serves as a pivotal role in enhancing an individual’s mastery of a particular behavior. This can be done through performance desensitization and exposure which enables the individuals to face their behavioral weaknesses in a safer and more relaxed environment. This helps them to master that particular behavior and make it work to their advantage.

On the other hand, vicarious experiences as defined by Bandura (1998) refer to a situation whereby an individual observes others confront difficult tasks without fear of adverse consequences. This boosts an individual’s self-efficacy by proving that with effort and persistence, the individual can be able to accomplish a task which previously seemed difficult or impossible. On the same note, Bandura (1998) defines verbal persuasion as the process through which people are motivated to complete a task through instructions and suggestions from others. However, since this concept is not closely related to personal experiences, it may fail in its function if the patients perception is clouded by past failures in given behaviors and tasks.

On-Time Delivery!
Get your customised and 100% plagiarism-free paper done in as little as 3 hours
Let’s start
322 specialists online

From this critical analysis of the structure and functions of the various concepts presented by Bandura in this theory, it can be argued that the theory has a high level of clarity and consistency which are indicators of a great theory (Meleis, 2007). This can be attributed to the fact that Bandura’s assumptions and concepts interrelate and can be applied in the analysis and/or development of personal efficacy levels exhibited by individuals. In addition, the definition of terms as well as their coherence is done in a rather simplistic manner which makes the theory a good front for behavioral change and analysis.

Diagram of the theory

As mentioned earlier, the self-efficacy theory was derived from the social cognitive theory. Bandura used a triangular representation to further illustrate the connectivity of the core aspects in the social cognitive theory. This theory is based on the assumption that behavior, environment and personal factors affect each other during the development of a personality. The diagram below therefore showcases how these three factors affect each other. 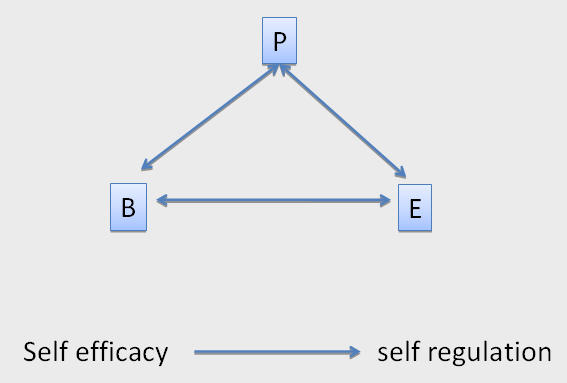 From this diagram, the theorists show that the three aspects P (personal factors), E (environment) and B (behavior) are interlinked and they all affect the level of self efficacy exhibited by an individual. From this diagram, the interconnection between these three core factors is highlighted. However, the diagram used to explain self efficacy (Appendix A) is simplified so as to explain the relationship between the four founding principles of the self-efficacy theory. These are: performance accomplishments, vicarious experiences, social persuasion and emotional arousal.

From the diagram (Appendix A) it is evident that these principles affect an individual’s self-efficacy which in turn determines the behavior or performance of that person. For example, according to the diagram, if a subject is successful in accomplishing tasks, his/her self-efficacy will increase and he/she will become more confident. However, if the subject experiences failure each time he/she performs a task, his/her self-efficacy will reduce thereby lowering his/her confidence and self esteem. In addition, the factors highlighted in this diagram show how they influence an individual into acquiring complex behaviors. In regards to my research project, this diagram as well as the principles of this theory shall be used to evaluate how the emotional state of the IPV victims affects their self-efficacy and subsequently, their performance/behaviors.

As previously stated, the main aim of my research will be to determine whether giving these women the smartphone will make them feel safer in their environment. The possible outcomes under the application of the self-efficacy theory are as follows:

In regards to the representation of the diagram, it is well labeled and the links between these core concepts of the theory are clearly defined. In addition to this, the relationship between the diagram and the main text regarding this theory is congruent in that even without the text, the diagram can, easily be explained and understood. In regards to the logical implication of the diagram, the theorist used a simple diagram. In addition, the linkages between the concepts are well marked and the directions are well indicated. Furthermore, the directions are logical and if followed, they all arrive at the same conclusion no matter where the starting point is. This shows coherency and logical representation of the text through the diagram.

According to Meleis (2007) a theory must have the ability to be applied in various disciplines. This is what is referred to as the circle of contagiousness. The self-efficacy theory has over the years gained prominence in various disciplines. Since its development in 1977, the theory has been used by various individuals and institutions in research, education and even administration. Its acceptability and applicability in the resolution of key issues indicate that the theory is indeed well formulated and efficient.

As Schunk (1991) explains, the need to boost individual’s self confidence not only benefits their personal goals but also help them achieve the goals set in their environment. For example, if an individual learns how to say no to drugs, he/she unconsciously helps in reducing the number of drug addicts in a given society. As such, the theory of self-efficacy has been instrumental in boosting employee’s productivity, motivating students and helping professionals determine the best course of action in given situations. While it may be argued that the theory has some flaws, the benefits accrued over the years as a result of its application in various fields are evidence that the theory actually works. For example, I intend to apply the theory in my research project. While there are other theories that can be utilized in my topic, the theory of self-efficacy has proven to be the best and logical choice.

This can be attributed to the fact that Bandura’s assumptions and propositions are universally accepted and clearly defined thereby making his theory a foundation onto which further research in different fields can be conducted. In addition, the level of flexibility exhibited by the theory enables a researcher to apply it in different situations with a high probability of attaining credible results. Furthermore, the applicability of this theory in different studies indicates that it is an efficient tool to use in my research. Since I am going to focus on how some elements can be applied in an environment to influence attitude and behavior, the concepts proposed by Bandura are by far the most applicable in that situation.

In regards to its usefulness in administration, Meleis (2007) states that a useful theory is one whose concepts match with the needs of the organization or person applying it in different situations. To this effect, Brennan (2009) states that the theory has been accredited due to its congruency in the nursing practice as well as its ability to influence positive attitudes in regards to customer service and quality control. As Brennan (2009) reiterates, the theory of self-efficacy has a detailed procedure of channels that can be applied to eliminate unwanted behavior and enhance self-efficacy. This is very instrumental in the nursing profession considering that there are legal ethical and personal aspects that constantly have to be separated in a work setting.

This critique has highlighted the various aspects of the theory of self-efficacy. A review of relevant literature has been provided to evaluate the efficiency and applicability of this theory in various aspects of life. The importance of this theory to my research project has also been highlighted. As a matter of fact, the success of this theory in addressing social problems has proven to be an integral part in the study of human behavior. As such, more research should be done so as to supplement and improve this theory. This will not only help us cope with situations, but it will also ensure that the upcoming generations receive the best treatment and care needed to make them responsible and self-motivated citizens.

"On the knife's edge" Term and the Behavioral Therapy
“Sources of Power: How People Make Decisions” by Klein